UX Blog
You are here: Home / UX Blog / Technology / User Experience (Not Technology) Is The Secret To Apple’s Succes...

Innovation is defined as “the introduction of something new” and when most people think of Apple they think of an innovative technology company. However, I would argue that Apple is really known more for designing innovative user experiences than it is for developing innovative new technologies. In other words, when it comes to taking technologies and changing the way people experience those technologies, no one is better than Apple.

How many portable media players were there before the iPod? 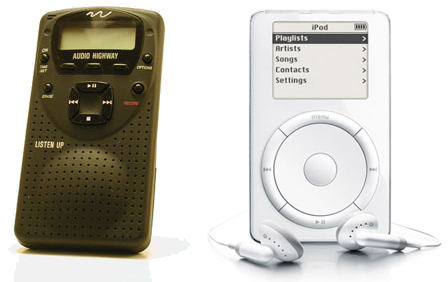 How many smartphones were there before the iPhone?

Apple wasn’t in the business of making smartphones before launching the iPhone in 2007. Now it dominates the market. They didn’t invent the technology used to make phone calls, read email, take photos and surf the Internet on a handheld device—they made the experience of using a smartphone better by focusing on the core needs of the product:

How many tablets were attempted before the iPad?

Apple wasn’t in the business of making tablets before launching the iPhone in 2007. Now it dominates the market. They didn’t invent the technology used to make a tablet—they made the experience of using a tablet better than any tablet that was made before it.

With the passing of Steve Jobs, we begin to learn more examples of how his fanatical focus on user experience drove the company to launch its most successful products. In this excerpt from Walter Isaacson’s authorised biography ‘Steve Jobs’ , we learn what motivated Steve to create the iPad and how he focused on an element of Microsoft’s user experience that would prevent it from ever catching on:

This guy badgered me about how Microsoft was going to completely change the world with this tablet PC software and eliminate all notebook computers, and Apple ought to license his Microsoft software. But he was doing the device all wrong. It had a stylus. As soon as your have a stylus, you’re dead. This dinner was like the tenth time he talked to me about it, and I was so sick of it that I came home and said, “Fuck it, let’s show him what a tablet can really be.”

In the video clip below, we learn that, ironically, Apple had the iPad before they had the iPhone but Steve felt the user experience methods designed for the tablet would be perfect for a phone.

What Not To Say In A UX Design Interview (Vol. 1)

The ROI of User Experience (Video)
Scroll to top
We use cookies to ensure that we give you the best experience on our website. If you continue to use this site we will assume that you are happy with it.Ok